the STrengths and Weaknesses

The franchising sector has had a troubled past – we have had some experience as franchisees.

We do not, and will not, offer franchising as a way of accessing our marine assets and expertise. Here we will explain our view of the good and the bad of franchising and how we have come to the conclusion that franchising will not form part of our business plan.

Our experiences started back in 2012 when we purchased a Boab Boat Hire (now called Boab Boats) franchise in Sydney. This is not meant to be a commentary on Boab Boats, rather an outline of our experiences. Your milage may vary as they say, however we have since had other similar experiences recounted to us by franchisees and franchisors in a number of industries – not just the marine sector.

Before we outline some of our views lets lay out the end result of our foray into franchising:

3. We wasted a massive amount of time

When we purchased our boat business it had the potential to be a dream come true – providing boats and training to people on the most beautiful waterway in the world.

We very quickly realised that there is a big difference between a franchisor that knows how to enable a franchisee’s success and one that is really only focussed on  their own.

We discovered that there are some out there that can do neither!!

The first 2 or 3 months were spent getting the business up and running and the franchisors past experience certainly shortened some of that learning process. We then spent some of the first 12 months trying to see how we could grow the business following the ‘marketing and business plans’ the franchisor provided. This was not successful.

The next four years were spent trying to grow in spite of the franchisor rather than with them. One of the big problems with a franchise system is that doing things that you believe will grow your business is not always ‘allowed’ by the franchisor. It can make life tricky for them if you are doing stuff that they should be doing under the franchise agreement.

After five years were up we decided enough was enough and it was time to exit the franchise system. We won’t describe that process in any detail here – it is still too raw.

What did we learn?

The basics of starting the business were taken care of. We were already running a business so this was of less value to us. We still needed an accountant to setup and register the business entity but the franchisor did help with the transfer of registration of boats and trailers.

We had a brand to start with – we had boats and business cards with logos. These days getting this done online is simple so again, the franchisor value is much more limited.

We had help with the regulatory side of things – this was not trivial and would have taken us time to understand and workout how to operate.

The systems, the website, the booking system(s) the processes and the organisation were dreadful and remained so until the day we left – worse still, despite many attempts by many franchisees to seek change, these issues still remain. As an example, at the time of writing, the boab website is down because of SSL certificate issues and, despite us asking two years ago, they still don’t have a process in place to test these systems to make sure they are up and running. The website has been down for 6 days now – we are interested to see when it comes back! 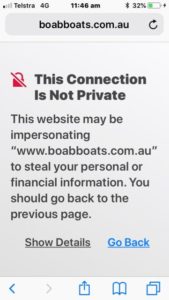 In the last 2 years of our engagement a group (more than half of all franchisees at the time) of disgruntled franchisees from around Australia got together in Sydney for a two day workshop and put together a set of minutes that were forwarded to the franchisor in the form of a request for some changes to improve matters.

Nothing was actioned and in fact this same set of minutes formed the basis for the notice of dispute raised by three of these franchisees some two years later.

Again, this notice of dispute, and subsequent mediation, brought no results and all three franchisees ended up exiting the franchise system.

There is a link below to our submission to the parliamentary enquiry into franchising – that outlines many of our structural issues with franchising. We also mention our notice of dispute below too – a copy is available if you are interested.

The very end of our engagement was particularly nasty. Lots of personal emails and messages that were so unpleasant we won’t share them here. We sold the business and got out for a while, buying back in recently and taking over the operation once our contractual obligations had passed.

We now have a business providing boats and training to people on the most beautiful waterway in the world – we are growing that business and we are more successful than we ever were inside of the franchise system. Most importantly we are having fun and enjoying our lifestyle.

Before parting with any money, speak with as many current and past franchisees as you can. Get copies of any past notices of dispute and study them. Seek a set of financials for your franchise area and make your continued status as a franchisee contingent on these financial projections (costs, revenues and gross/net margins) coming true.

Remember – you may be better just starting your own small business and using the money saved on franchise fees to pay for some outside assistance to help you get started.

If you would like to learn more about the pitfalls of franchising or the specifics of our experience with Boab Boats feel free to get in touch here magyargenerikus.com.

We do not want to see yet more good people blow their hard earned financial reserves on a franchise that they should never have bought into.

If you have progressed to discovery, they should, by law, have provided you with the details of ex-franchisees like ourselves and any others that have left. It is possible for ex-franchisees to ask to be removed from the discovery documentation or to have their removal be part of their negotiated exit.

As is relates the the franchise system we were in, as far as we are aware this only applies to the ex-franchisee from Perth, Freemantle and Broome in WA. The rest should all appear in the discover document.

If you are considering a Boab franchise, don’t worry if they have not provided these details – we have them and can happily provide them so you can get a balanced view of life inside that franchise system.

We also have a copy of our notice of dispute which, once we have an initial discussion, we are happy to provide if it will be of assistance to understand what issues you may face inside a franchise.

Finally, due to the growing list of franchise scandals the federal government held an enquiry into the franchising sector in 2018 and 2019 – the details are available at https://www.aph.gov.au/Parliamentary_Business/Committees/Joint/Corporations_and_Financial_Services/Franchising